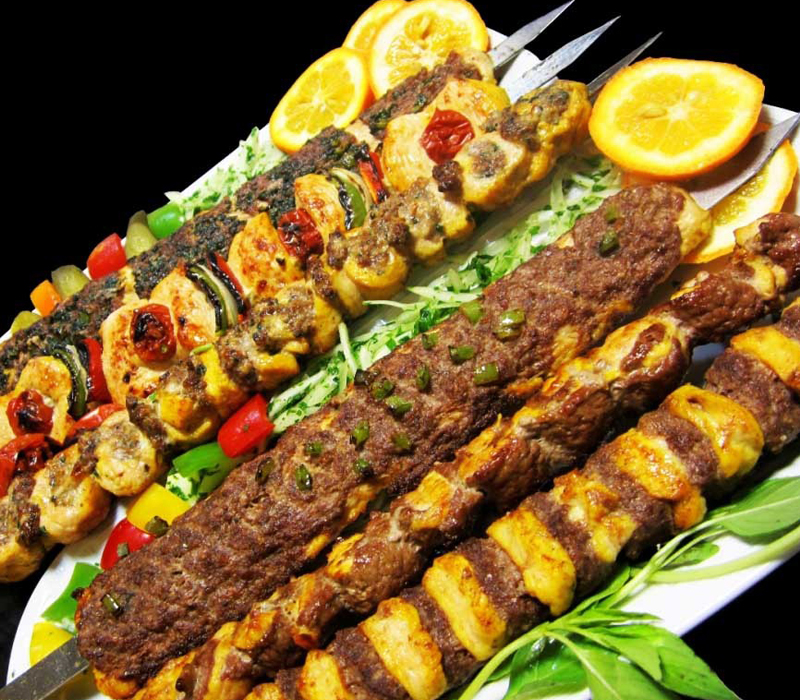 Kebab is a favorite food of many Iranians. This is a good excuse to know more about the types of kebabs and its history and be more proud of this Iranian food. Most health and nutritionists believe that it is better to eat boiled meat, but grilled meat tastes better than boiled meat. To prepare it, we must pay attention to the points so that its nutritional value is not reduced as much as possible.

Eating all kinds of kebabs with their side dishes is one of the initiatives of the Iranians, whose origins go back to the kitchen of the kings of the Persian court. When Nasser al-Din Shah became king, he brought to Tehran the chefs who were involved in cooking kebabs. People at that time were more accustomed to eating kebabs with bread, but gradually rice also became a staple of kebab plates in the court to complete this delicious Iranian food.

Kebab and its side dishes

Apart from vegetarians, there are few people who do not like kebabs. Apart from this, grilling meat is a healthier method than other methods such as frying meat. Of course, you should be careful not to roast the kebab at high temperatures, because drying and charring the meat destroys its useful properties and introduces dangerous compounds into the human body.

Most kebabs are made from red meat, such as beef or mutton. Grilled meat is one of the good sources of protein for the body and it is recommended that different people consume 60 to 150 grams of meat per day, depending on their age and body condition. In addition to protein, meats contain iron and zinc, which are essential for the body. Remember that the best way to eat kebab is to eat it with a little rice or bread, tomatoes, sumac, onions, vegetables, fresh lemon and a small amount of yogurt or buttermilk to make a complete meal and include all four main food groups. Take.

Types of kebabs in Iran

Apart from the Iranian people, kebab cooking is also popular among Arab and Asian countries, but Iranian kebab is something else. Lamb or beef are mostly used in the preparation of kebabs. Different spices also give kebab a different taste. The most famous Iranian kebabs are:

Roast ribs is the name of the most familiar food in Kermanshah, which can be prepared with mutton ribs in a very simple way. You can taste and enjoy this authentic Kermanshah food in Rijan Tourism Restaurant as the best restaurant in Rasht.

Mutton or beef is minced. The minced meat is minced again to form a dough. Mix the meat dough with the grated onion and salt. They are skewered and grilled on charcoal.

It is prepared from fillet and lamb or beef. It is known for its large pieces of meat and its resemblance to the dimensions of a tree leaf.

It is similar to kebab, but it is skewered in separate thick pieces.

This kebab is made from six pieces of mutton with a piece of rib bone attached to it. It is very popular and is one of the famous kebabs in Mashhad.

This kebab is specific to Gilan province and is prepared from fresh beef and sour ingredients such as pomegranate paste and orange juice. Which is served in the best and most original way in Gilan restaurants.

It is a combination of a beaten skewer and a kebab skewer.

A piece of flavored mutton is skewered and grilled one by one with a piece of chicken.

Chicken or chicken is minced with bones and without bones. Grate in lemon juice and onion and saffron. They are skewered and grilled on charcoal.

Its shape is like a kebab. With the difference that both its length and diameter are more than the grilled kebab and its texture is composed of semi-minced mutton.